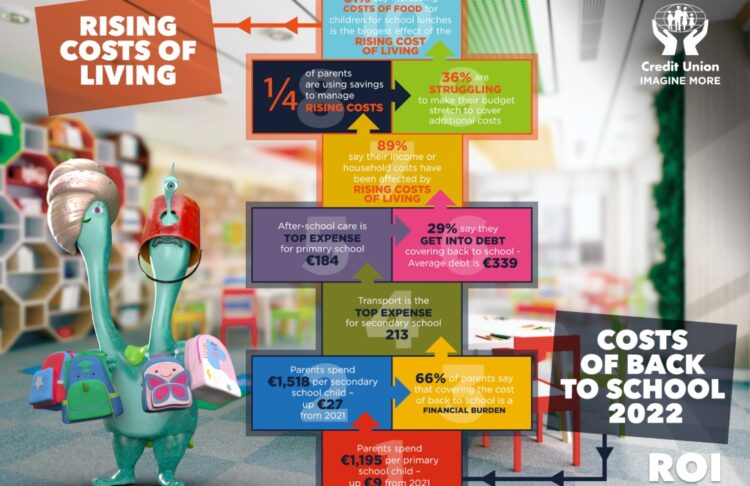 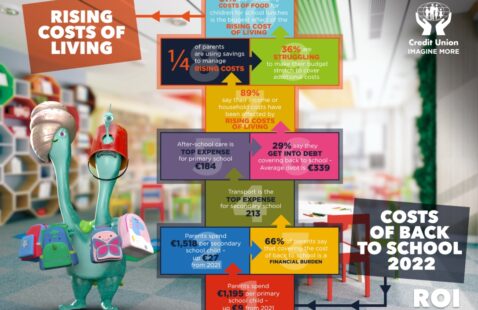 Back to School Costs

Back to School
Two thirds of Irish parents (66%) say the cost of Back to School is a financial burden, up from 63% last year. Parents getting children ready for secondary school are spending €1,518 per child. This is up €27 on the €1,491 being spent last year. Parents of primary school children are also spending more; €1,195 this year compared to €1,186 last year. Understandably, more parents of secondary school children are finding costs a struggle, seven in ten (72%) compared with 66% of parents at primary level.

The findings were revealed in a national survey of 764 parents of school children (out of a sample size of 2,460) by the Irish League of Credit Unions (ILCU). The survey was carried out by independent market research company, iReach Insights in June 2022.

The number of parents in debt over back to school costs has increased by 5% to 29%. Of these, over one fifth (21%) reported debts of over €500.  The average debt parents find themselves incurring is €339 which is up (up €3) on last year’s figure.

The increased costs of living are evidently having an impact on school items with the most expensive secondary school item this year being transport at €213, up from €195 last year, reflecting rising fuel costs. School books and uniforms are also high at €210 and €195 respectively. After-school care is the top expense for primary school parents at €184, up €27 on last year, followed by extracurricular activities at €167.

Of considerable note in the survey is the sharp increase in parents saying they will deny their children extracurricular activities because they can’t afford them, rising to 67% from 46% in 2021. The survey also revealed that 65% of schools are still seeking so called ‘voluntary contributions’ at €124 for primary schools and €146 for secondary, an overall average increase of €11 on last year.

When it comes to funding back to school costs, the majority of parents (74%) use their general monthly income, with just over a third relying on their savings. The use of credit cards to purchase back to school items is up 6% to 23% from 2021 as is the number relying on a bank loan – 1% to 3%.
While there is a slight decrease in the amount of parents shopping online for school supplies (65%, down 3% vs 2021), two thirds of these parents do so to access better deals. Saving on petrol as a reason for shopping online has seen a significant jump to 31%, up 17% from last year.

Rising Costs of Living
This year’s survey also looked at the rising costs of living in general. 89% of respondents say their income or household costs have been affected by rising costs of living since the start of the year including 92% of parents with children in school. Over 90% are seeing additional costs for groceries with a similar number experiencing increased costs on household utility bills.

More than 1 in 3 (36%) of parents say they are struggling to make their household budget stretch to cover the additional cost of living increases. When school going costs are added the number who are struggling increases to 42%. One in ten (11%) of this cohort are falling into debt in an effort to cover household costs.

When asked what options they were considering to help with costs, 65% of this group said they are cancelling or reducing non-essential services and activities such as gym membership and subscription TV packages. Other options include trying to earn additional income (29%), taking a personal loan (18%), borrowing from family or friends (14%), or seeking debt and budgeting advice (8%).

When parents were asked if the rising costs of living were affecting the costs of education, 61% said the Increasing costs of food for children for school lunches was the biggest effect, followed by costs of new school uniforms (53%) and costs of school trips or activities (45%).

More than half of parents with schoolchildren will have to balance working from either at home or the office with looking after their children over the school holidays. 45% said they would will be using annual leave allowance to balance work and school holidays while a third said they would be relying on family and friends to help out with looking after the children.

Post COVID 19 Concerns
When asked about the impacts of home schooling during the pandemic lockdown on their children, 82% of parents said that the biggest impact was that children missed their friends and social activities. Almost half said their child’s physical health had suffered with two thirds worried about their mental health. As regards their child’s education, the biggest concern for parents is the pressure on their children to catch up on missed teaching over the past two years. There was a marked drop from 2021 in parents’ concern of their child being exposed to COVID 19 as a result of returning to the classroom, down from 41% to 27%.

Commenting on this year’s findings, ILCU Head of Communications, Paul Bailey said, “The costs of sending children to school this September are the highest since the ILCU started its annual survey in 2017. This, on top of the rising costs of living and high inflation, will heavily impact on households across the country. What is particularly concerning is the increase in the amount of parents reporting that they will go into debt to send their children to school.

“While two in three parents believe that schools don’t do enough to keep school going costs down, many are cutting back on extracurricular activities for their children to balance the books. Others are relying on savings or turning to family and friends for loans. We are also seeing a huge increase in the number of parents using their credit cards to purchase back to school items. As we know this is an expensive form of finance and I would urge parents to consider cheaper forms such as a credit union or bank loan.

“When it comes to moneylenders, it is concerning that 10% of those in debt know they are using an illegal moneylender, while another two thirds don’t know if their moneylender is regulated or not. Again, I would urge parents who feel they have no alternative to a moneylender to talk to their local credit union about accessing more affordable and ethical forms of finance.”